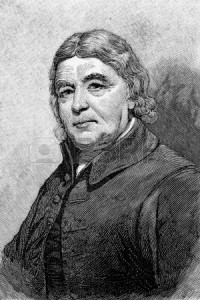 Any account of the life of Francis Asbury would be significantly incomplete without the inclusion of the bulky Scottish preacher with the broad smile, Alexander Mather.

In time, Alexander Mather labored with a baker in London, a man who feared God. The man providentially led Alexander Mather to John Wesley’s, Foundry Church in London. The building which was once a foundry casting guns for the king was purchased by John Wesley and his brother Charles Wesley, turning it into the cradle of Methodism in London. Before his entrance into the ministry, the conversion experience of Alexander Mather prompted the young man to convince his boss and the other bakers of London to refuse to bake on Sundays. The effort met with much success; only two of the numerous bakers refused the request. Over time, his boss became wealthy; Alexander Mather and many others were convinced that it was the decision to honor the Sabbath that contributed to his boss’s success.

Another account from the life of Alexander Mather tells of an incident where he nearly loses his life. This accident, along with his near death experiences as a Jacobite rebel led him to conversion. The story goes that one day as Alexander Mather was hastily walking along a crowded London street, he noticed a loaded cart which stood in the path. It was nearly filled up. In spite of the large load in front of him, Alexander Mather decided that he could squeeze by the cart which placed near to the wall of the structure which sat adjacent to the loaded cart. Just as Alexander Mather placed himself between the cart and the building, the cart began to move. The moving load caught the basket which he held several baked items. Immediately, the cart crushed Alexander Mather against the wall and dragged him. According to the scene in Black Country, “The draggin’ seemed to go on very long, so long that Ah’ feared for my life.”

Eventually, the dragging cart arrived at a shop window. Providentially, the window gave way. Through the window, Alexander Mather tumbled into the cobbler’s shop and was released of the devilish hold of the cart. Everyone who saw it supposed Alexander Mather should have been crushed to death, or at least that his arms and legs would be broken. However, Alexander Mather received no hurt at all, other than a few bumps and bruises on the back of his hand. This rescue from certain death was the second time in the life of Alexander Mather that the Lord made an attempt to gain his undivided attention.

In the year, 1757, the Methodist Conference in London, specifically at John Wesley’s Foundry Church, approved the additional monies for the wife of Alexander Mather. This practice began the tradition of providing for the wife of a traveling preacher. The tradition continues to this day. Officially, the year 1757 marks the beginning of the itinerancy of Alexander Mather. John Wesley sent him to Ireland.

According to the book, Black Country, Alexander Mather entered the Staffordshire Circuit, the circuit in which Francis Asbury resided, sometime in the year, 1759. Another account from Thomas Jackson’s book, The Early Methodist Preachers, Volume 2, gives the following account. The account from the book can be found at this website: “The next year (1759) I was in Staffordshire, where it pleased God to work in a very eminent manner; at Darlaston in particular, where there was a small but steady society of long standing. Several of these had borne much persecution and took joyfully the spoiling of their goods. Ever since, their behavior has been unblameable: and yet none of them could say, “I know that my Redeemer liveth!” Some of these coming over to the prayer-meetings at Wednesbury, and hearing (what they thought they had never heard before) that they were to believe now; that they might come to Christ now, without any other qualification than a sense of their own sinfulness and helplessness; they were utterly astonished, and began to be amazed at their slowness of heart. Presently a prayer-meeting was set up at Darlaston. And in a little time many souls were set at liberty. The oldest stood out longest. After all they had done and suffered, they found it hard to come, as having done nothing. And when they were urged to it in a class or prayer meeting, they were ready to gnash their teeth. But whether they would hear or forbear, God continued to add more and more souls to His genuine Gospel. Nothing stood before it. Many of the servants and children of these old professors cried out, “What must I do to be saved?” Being pointed to the Lamb of God, they believed, and rejoiced in God their Saviour, to the utter astonishment of their unbelieving masters and parents. In one night it was common to see five or six (and sometimes more) praising God for His pardoning mercy. And not a few in Birmingham, Dudley, and Wolverhampton, as well as in “Wednesbury and Darlaston, clearly testified, that the blood of Jesus Christ had cleansed them from all sin.“