In my 25 years of researching Francis Asbury and his Atlantic crossing, as far as I can tell, no one has been able to determine the name of the ship that brought him to Philadelphia on Sunday, October 27, 1771.  Perhaps it is listed somewhere, but I have not run into it.

Despite the absence of a ship’s name, Francis departs the port of Pill, Bristol England, on Wednesday, September 4, 1771 and arrives Philadelphia on Sunday, October 27, 1771.  Asbury’s journal clearly mentions the dates of this Atlantic crossing.

Despite the fascination of the quest I was engaged in, (finding out the name of the ship that delivered Asbury on his Atlantic crossing), I was easy distracted by the articles of current events surrounding the growing dissent and oppression of the colonists.  However, I digress. 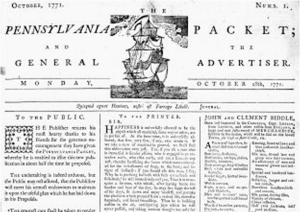 Back to Francis Asbury and his Atlantic crossing. 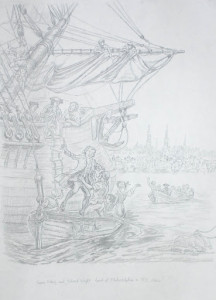 According to November 4, 1771, Pennsylvania Packet and October 31, 1771, Pennsylvania Journal, two ships arrive the Philadelphia port from Bristol during the previous week of their printing.  The Customs House, Inwards-Entries-list, contains the records.  In addition, there is September 1, 1771, cross reference to one of the ships in the Pennsylvania Journal printed the following week on November 4.  The personal account by a Captain Montgomery of the ship, Chalkley, states that the Captain left Bristol on the first of September and that there were two ship Captains who were planning “to sail in a few days after him.”  He gives the names of the two captains, Captain Seymour Hood, and Captain Davidson.

The Pennsylvania Chronicle also gives an account of Captain Davidson from Bristol, that “on the 25th of September, in Latitude 40, 3, Longitude 42, spoke Captain McCuddy, in a Brig from Baltimore for Bristol, out 26 days.’  I have yet to find any significant seafaring meaning for the term “spoke.”  The best I have come across indicates a friendly verbal exchange or greetings between captains on each ship.  I would assume it has to do with verification of some kind, letting others know the location and time of visual contact.

What are the name of these two ships that are the likely vessels that deliver Francis Asbury to the new world?  The Betsey and the Warwick are the two ships listed and cross referenced in the publications above. 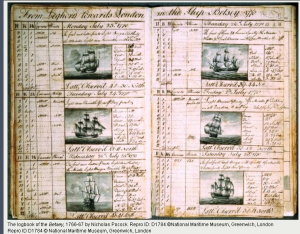 A Mr. Seymour Hood captains the Betsey at this time.  It apparently is a big ship, a three-masted ship of 300 tons.  I’ve come across a ship’s log for the Betsey. It details a voyage in the years 1766 and 1767.  I have also found out that Mr. Seymour Hood is from a famous seafaring family.  Two British Admirals also sailed at the same time.  Their names are Admiral Samuel Hood and Admiral Alexander Hood.  Their exact relations I have not been able to uncover.

The Warwick, like the Betsey, is a three-masted ship of 300 tons, a worthy craft for an Atlantic crossing.  The Pennsylvania Chronicle for the week of October 21 to 28 of 1771 lists an advertisement for an importer by the name of John Mason.  The ad states, ‘John Mason, has just imported in the ship Warwick, Captain Davidson, from Bristol, a neat assortment of the sundry undermentioned articles, which are for sale, at his store in Front Street, near Market Street, viz.  The best Wilton Carpeting… bed quilts…’  The ad goes on to state an interesting fact, the ship is loaded with Toys and fine “Queen’s Ware China.”  Did Asbury sail over on a ship full of toys?  Interesting thought.  It would sit well with his unique sense of humor.  An additional advertisement for a woman named, Mary Eddy, states that she has “a large and very neat assortment of Ironmongery, cutlery, saddlery and glassware,” all imported recently from Bristol.  Asbury works in and hails from the iron-working capital of the world at that time, the West-Midlands of England.  It would make sense that the ship originating from the Bristol port would be carrying items from the ironworking industry.

The Pennsylvania Journal for October 31, 1771, gives a little more detail about the ships.  For the Warwick, it states that the ship is captained by Samuel Davidson, “Has good accommodations for passengers, having great part of her cargo engaged, will sail in 3 weeks.  For freight or passage apply to said Master, (Samuel Davidson), on board at Captain Goodman’s wharf.”

For the Betsey, The Journal lists Seymour Hood, Master, “Is taking in for Bristol.  she is a good new vessel, with neat accommodations for passengers, the chief part of her cargo being ready to go on board, is intended to sail about the 15th of November.  For freight or passage, apply to Thomas Clifford and Son, or the Master on board at their wharf.  A great variety of Merchandise, imported in said ship from Bristol, and the last vessels from London, Liverpool & Hull, to be sold on reasonable terms by Thomas Clifford and Son, at their store in Water-Street.”

In my opinion, Francis Asbury’s Atlantic crossing occurred on one of the two ships.  It was either the Betsey or the Warwick.

In honor of Francis Asbury’s sense of humor, I close with an anecdote found in the October 28, 1771 Pennsylvania Chronicle:

“A very curious and valuable library, some time since, having been on sale, among the rest a manuscript law book was put up, the performance of a late eminent hand.  To enhance the price, and stimulate the company to purchase it, Mr. ___  ____, the auctioneer, told them, that besides its originality, it had the additional advantage of an opinion concerning it, written in a blank leaf, by one of the most distinguished sages of the law, but he must beg to be excused the producing it, till after it should be sold.  This took so well with the literati, that they advanced on one another at each bidding, till it was knocked down at a very considerable price, to one who was determined to have it at any rate, who when it was delivered to him, so eager was the expectation and impatience of the company to read the opinion, that the purchaser for fear of being crowded to death, to his mortification, read these words: Memo,  I have carefully read this book, and do pronounce it not worth one farthing. H.”

Let’s hope history doesn’t repeat itself with my book series on Asbury.  Have fun and bless someone.