In the year 1732, Robert Strawbridge was born in the town of Gortconnellan, Drumsna in Ireland.  The town’s name means “the ridge over the swimming place.”  It is here that the south-eastern flow of the majestic River Shannon, makes an almost 90-degree turn, proceeding northeast.  As if it has a mind of its own, the flowing body of water unexpectedly turns again, this time heading north.  It eventually turns back to the east and finally regains its original course for the south.  The resulting curve of the back-tracking waterway creates a natural loop blessed with some of the country’s most fertile and wooded lands.  From these abundant furrows, Robert grows up on a farm with a privileged view of the river. 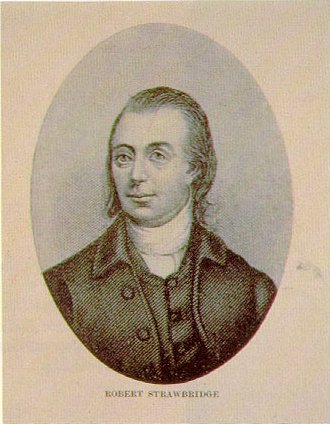 The land is a gift to his direct ancestor almost 150 years before.  Robert is from a line of the planted Englishmen which the English King James places in Ireland.  To the Catholic in Ireland, this displacement of Irish settlers by the Anglican King amounts to a military and religious conquest.  Others astutely point out that the infiltration by the English leadership is an effort to modernize an archaic, even brutal society.  Regardless of one’s opinion, the plantation of the English settlers not only ends centuries of killings by feudal clans it also brings development of several new cities along the advantageous river.  The town of Drumsna becomes one of these new urban areas.

Robert gains the benefits of an education; he is eloquent in speech, intelligent and from an affluent family.  He is also a strong man, a carpenter by trade, his sturdy frame topping out at just less than 6’ tall.  His shy but brilliant eyes highlight his shoulder length hair and handsome face.  His gentle smile warms the hearts of many, including one who he will marry.

The summer of 1758 caps off a two-year spiritual journey for the young tradesman from Drumsna.  In 1756, he experiences a Christian conversion.  Fitting with Robert’s personality, his experience is not a common one; it was under the guidance of an unlikely mentor, Laurence Coughlan.

Unlike the Anglican Robert, Coughlan is more in line with the traditional Irishmen of the 18th century, a real Hibernian.  Born in Drumsna to a Roman Catholic family, Coughlan does not experience the benefits of privilege like Robert; he is a man of little education.  Despite his limited beginnings, he finds himself transformed by the words of the Bible, taught by the preaching of Wesley’s itinerants in the year 1753.  His new birth inspires him to vigorously study the word, eventually leading him to preach to the inhabitants of Drumsna.  Within two years, Wesley recruits him to join the itinerant ministry.  A year after that, Coughlan is on his way to preach to the fishermen of Newfoundland.

Early in his ministry, one of Coughlan’s first home-town converts is Robert’s younger brother, Leonard.  The evangelistic efforts of Coughlan, on the 16-year-old brother, touches the heart of Robert also.  In keeping with Robert’s “all in” approach to life, he abandons his trade and starts to preach.

His independent spirit soon becomes evident.  Doubtless, his Anglican experience, much like Coughlan’s Catholic experience, gives Robert the opinion that he wants no part of institutionalized religion.  Within months of setting out to preach, Robert’s zeal for reaching the lost souls of Leitrim County causes him to regularly distribute communion and baptize new converts.  It doesn’t matter to Robert that John Wesley strictly forbids the Wesleyan itinerants from distributing the sacraments.  Even if it means going against the norm, Robert is determined to bring the entire Christian experience to each person he meets.

This distribution of the sacraments by those who are not ordained is not a new thing beginning with the individualistic Robert.  Just a few years before, many of the new converts in Ireland, wishing to preach, had themselves licensed under the Toleration Act of 1689.  Awarded with this provision, men like Thomas Walsh and the brothers Charles and Edward Perronet, set out on their own, distributing the Lord’s Supper and Baptism to the faithful.

Despite the unconventional individuals who precede Robert, the Anglican and Wesleyan faithful in Drumsna consider Robert’s individualistic approach too zealous.  They ask him to leave within a few months of his initial efforts.  Unshaken by the resistance, he gathers his horse and heads out on a preaching tour of the neighboring counties of Sligo and Kilmore, ending up in the County of Armagh, and the town of Terryhoogan.

Married shortly before 1760, he soon finds himself as many other Irishmen, considering leaving Ireland for America.  On his wedding night, he reminds his new bride of the words of the Priest that married them that ‘marriage is meant for procreation.’  He also prompts the question of whether or not she considered some of those procreative events happening in the American Colonies.  You’ll have to read The Asbury Triptych Series to discover the young couple’s decision.

Robert Strawbridge features largely in all three books of The Asbury Triptych Series. In the opening book, Black Country, Robert Strawbridge is a young fiery itinerant. His courtship and marriage to his wife is detailed. In addition, the Methodist movement in Ireland features largely in Black Country. In the second book, Beggar Bishop, Robert Strawbridge is having great success in ministry. His efforts launch much of America’s early Methodist movement in Maryland, Delaware, and Virginia. However, his efforts are not without controversy. He continues to go against John Wesley but giving the sacraments to his congregants. Early in his American ministry, a young and inexperienced Francis Asbury is forced to deal with this situation when he happens upon this disobedience. The stern, stick-to-design Francis Asbury, however, gives in and allows Robert Strawbridge to continue. Mostly on account of the large success that Robert Strawbridge is experiencing.

For a deeper article written on Robert Strawbridge, I would recommend the fine work by JR Wesley Weir.  You can purchase his biography on Strawbridge at http://www.amazon.com/Robert-Strawbridge-Additional-Perspectives-ebook/dp/B005DJLWUU/ref=cm_cr_pr_product_top.

I would also like to credit Mr. Weir with much of what you read here in this character detail of Strawbridge.  I also thank him for his patience with my many questions.