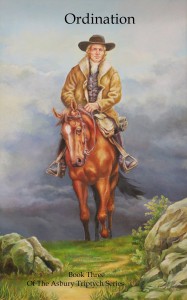 Ordination is the third “panel” of The Asbury Triptych. This third act opens with Francis Asbury at his lowest moment since arriving to America. Banned by several colonies from preaching and hiding in a Delaware swamp, Asbury frustrates because of his “dumb, silent Sabbaths.” His struggle has him seriously considering an attractive offer to abandon the colonies. In addition to this dilemma, a rebellious itinerant incites Francis’s 60 preachers to split- or more precisely abandon Asbury. In slightly more than a decade of his internal and external conflicts, this issue will define the success or failure of his work. Ordination climaxes with the famous Baltimore Christmas Conference of 1784.