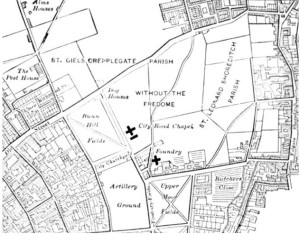 The story of the Foundry Church is rich with history. According to the Minutes of Proceedings of the Royal Artillery Institution, (Volume 6, page 235), “In 1704, Mr. Mathew Bagley took the Moorfields Foundry and, for twelve years, cast guns and mortars out of metal supplied for the purpose by the Board of Ordinance.”

With the harsh winds of the winter of 1739 imprisoning the Christian faithful indoors and the ill favor of the Anglican priests forcing John Wesley outdoors, the supernatural paradox resulted in John Wesley coordinating the acquisition and renovation of the old artillery foundry of King Charles.  Sitting atop Windmill Hill, north of Finsbury Fields, the building known for casting brass guns and mortars for the Royal Ordinance had sat quietly for 23 years after it was closed in 1716.

Why did the building which became the Foundry Church remain dormant since 1716?

May 10, 1716, is a day which ended not as planned.  It also ended the operation of the artillery foundry which made weapons for King Charles in the previous century. Prior to this day, “After the peace of Utrecht in 1713, the guns captured from the French by Marlborough were placed outside the Moorfields foundry upon Windmill Hill. It was afterwards determined to utilize the metal by recasting it in the form of English ordinance; and on the appointed day- Thursday the 10th of May, 1716- a large number of spectators attracted by the interest felt in the tropics, and in the manufacture of large ordinance, attended at the foundry to witness the operation.”  (Minutes of Proceedings of the Royal Artillery Institution, Volume 6, page 235).  According to the Mercurius Politicus dated the 18th of May 1716, “Several Gentlemen were invited to see the Metal run, which being a very great and curious Piece of Art, a great many persons of Quality came to see it, and some general officers of the army among the rest; but whether it was some unusual hindrance in the work, or their better fate that occasioned the Metal to be longer preparing than usual, we know not, but be that as it will, the Gentleman waiting past Ten O’clock, went all or most away. About 11 at Night, the Metal being ready, was let go… the burning metal no sooner sunk down to the bottom of the mold, but with a noise and force equal to that of gunpowder, it came pouring up again, blowing like the mouth of a volcano or a little Vesuvius. There was in that place about 20 men, as well workman as spectators, 17 of whom were so burnt that nothing more horrible can be thought of, neither can words describe their misery. About 9 of the 17 are already dead, the other 8 are yet living, but in such a condition that the surgeons say that they have very small hopes of above 2 of them.” (Mercurius Politicus, May 18, 1716). 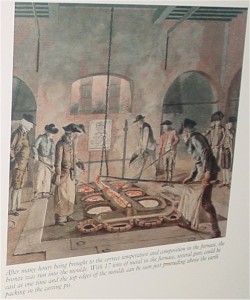 The explosion killed Mr. Hall, the Clerk of Ordinance, several of the other clerks received serious wounds. Also killed in this accident were Mr. Bagley and his son. It was eventually determined that moisture at the bottom of the mold caused the explosion. It was also brought to light that despite the warnings of a journeyman founder who spotted moisture in the bottom of the mold hours before, Mr. Bagley ordered the process to fully deliver.  As the extremely hot fluid touched the latent water, a catastrophic explosion immediately killed the workers and owners. 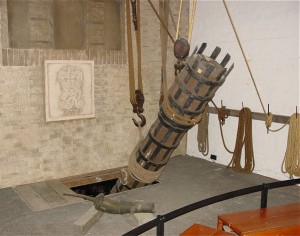 The disastrous event forces the British government to set up a new facility, the Royal Arsenal Woolwich Tower Place, taking over the process of producing brass ordinance. The accident also forces the foundry to close.

The Wesley brothers’ 1739 acquisition of the closed foundry in Upper Moorfields, London requires nearly eight-hundred British Pounds to renovate.  The finished church allows for seating fifteen hundred people in the main room.  An additional three hundred fit in space directly behind the sanctuary.  The Foundry Church is a simple structure, on the outside built of brick and mortar, on the inside adorned with several support columns and wood pews.  Upstairs are two apartments used by the Wesley family.

Not long after the acquisition of the abandoned building, John Wesley’s ministry transforms the converted war foundry into the cradle of Methodism. 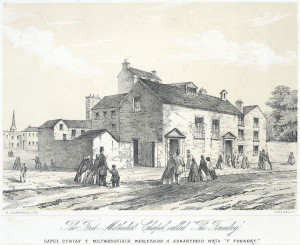 On a dark August evening in 1767, the swaying yellow lights of the Foundry Church lanterns hanging on either side of the entrance doors give a hallowed glow as nearly two-hundred of London’s faithful along with John Wesley and twenty of his itinerants gather for the opening evening of the conference.  Allowing the locals to attend the first day’s events, Wesley patiently awaits the following three days when he can focus on business. Sitting with Wesley’s itinerants is one who has spent the last year as an itinerant on trial. That young traveling preacher is Francis Asbury.