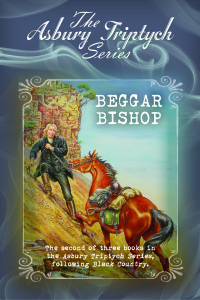 In traditional triptych fashion, the middle “panel,” Beggar Bishop, is the largest or most significant of the three books in the series.  The book functions as the engaging second act, full of personal and extra-personal conflicts- closing with the “down-and-out” portion of the protagonist’s experience.  Almost from the minute he lands in Philadelphia, Francis Asbury meets opposition, first from the English traveling preachers that preceded him to America and soon from John Wesley himself.  In time, even the Wesleyan faithful of the colonies demand that Francis is sent back home.  In spite of the cries against the unorthodox preacher from England, Francis Asbury presses on.  Even his plans to find safety in the home of a notable Delaware Judge backfire as the enraged colonists, (war with England has begun) drag the judge from his home for harboring a suspected British Tory, (Francis Asbury). 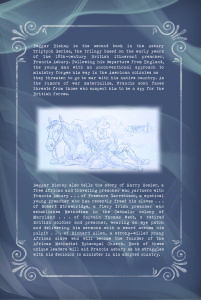 The welcomed events of Beggar Bishop are the rugged frontier men and ex-slaves who aid Asbury’s ministry once the outbreak of war sends the English preachers home.  Many of these men, barely in their twenties, have recently walked away from a life of gambling, thieving, carding, slave owning and imprisonment.  Not many are educated beyond an elementary-school level.  Almost all travel with weapons.  Despite the irregular characteristics, the men are the perfect accompaniment for the unconventional preacher from England.  Even with their shady background and coarse appearance, the most noted of this group will make America’s “Who’s Who” list of founding generation preachers.