Robert Williams is a fiery young man who hails from the mountainous lands of Connaught in western Ireland.  The area is largely unfavorable to agriculture, cold with rough terrain.

In a way, Robert Williams is a reflection of the inhospitable region.  Several times, John Wesley places Robert on probation.  Robert yearns to itinerate for the Wesleyan cause; however, Wesley highly disagrees with Robert’s obsession with criticizing the Anglican clergy.

Wesley voices his disapproval clearly, when talking of the Black Mountain region where Robert is ministering, Wesley communicates the following, “There was a general love to the Gospel here, (until simple Robert Williams preached against the clergy).(1)  It is strange everyone does not see 1.The sinfulness of railing at the clergy; if they are blind leaders of the blind, let them alone.  2. The foolishness of it.  It can never do good, and has frequently done much harm.(2)”

After several attempts to preach for Wesley in England, Robert Williams is able to convince Wesley to allow him to preach in the American colonies.  Wesley is adamant, “Permission was given him, on condition that he should labor in subordination to the missionaries who were about to be sent out.”(3)  The two evangelists that are about to be sent out are Joseph Pilmoor and Richard Boardman. 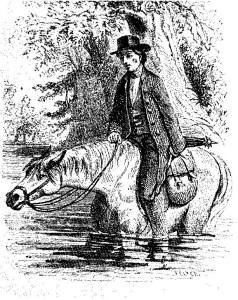 In America, Robert Williams excels as a preacher.  After an initial work with Philip Embury in New York, Robert teams up with Robert Strawbridge in Maryland.  His efforts eventually pull him in the direction of Virginia.  From here, his bold proclamations earn him the title of the spiritual father of Jesse Lee, the future father of Methodism in New England.  In addition to Lee, Robert William’s preaching brings the first Methodist preacher born in the American colonies, William Watters.  Robert’s efforts also work their way into North Carolina, earning him the father of Methodism label in North Carolina as well as Virginia.

Robert William’s accomplishments are noteworthy when you consider that he only travels for five years in America. Numerous men and women come to faith by the preaching efforts of Robert.  After several years of traveling, he marries and settles as a located preacher.  By 1775, he is dead.

Robert’s ‘first’ accomplishments include the first to publish Methodist books in America, the first to marry, the first to desist the traveling itinerancy and locate, and the first American Methodist traveling preacher to die.  Many more will die, the harsh conditions of the itinerancy claiming the lives of many who will never see their 30th birthday. Robert Williams precedes them to eternity.

(1) William Crook in Ireland and the Centenary of American Methodism, 1866

(3)  Dr. Stevens in his history of the Methodist Episcopal Church