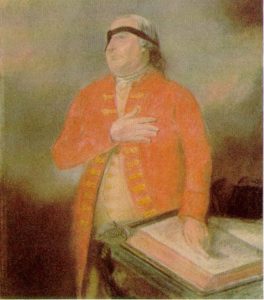 In 1772, Francis Asbury’s first encounter with the British Army Captain, Thomas Webb, must have been an emotional confrontation for the young itinerant recently arrived in the colony of Pennsylvania. Thousands of miles from home, in a foreign land, with little in the way of provision, the twenty-six year old’s first glance of the stout man of God preaching from the pulpit and wearing a scarlet and gold military uniform, a green eye patch, a narrow headband, and a sword at his side must have induced feelings of concern. Francis soon found out that there was no need to fear.

Eight years before meeting Francis Asbury, Captain Thomas Webb was a barrack master at Albany, New York. This was a recent civilian appointment by the king on account of Webb’s reluctance to leave his wife and new son for a military appointment in Ireland. It was a new kind of life for the seasoned military man who survived the humiliating defeat of the British forces by the French and Indian armies while trying to take Fort Duquesne in Pittsburgh, and two near-death experiences in the battle of Montgomery in Quebec bringing the loss of an eye, and several serious wounds. This new life soon turned sour with the death of his wife. He was forced to place his infant son with a family on Long Island, New York.

Back home in England, Webb came under conviction of spirit while listening to the preaching of a Moravian minister named Cary. A week or so later, Webb was introduced to the Methodist society at Bristol by a friend of Mr. Cary, the Reverend James Rouquet. Within months, the new convert was vowing to become a Methodist.

A visit to the Methodist society in Bath, England found Webb waiting in a preaching house on Avon Street. The gathering was disappointed to find that the preacher could not make the appointment. Several individuals intrigued by the appearance and words of Captain Webb asked if he would fill in for the preacher. He assured them that he had never preached before but would gladly share his conversion experience. The effort went so well that upon hearing of it, John Wesley gave Captain Webb the status of a local preacher. Later in 1765, the captain returned to Albany, New York with the authority of John Wesley to preach in the colonies.

In 1767, Webb visited his son on Long Island. This event provided the opportunity for the unique preacher to interact with the New York Methodist Society which met in a rented sail loft in Barrack Street. Entering the structure where the meeting was taking place, the room’s inhabitants were unsure of what to think. At this time in the colonies, the British forces were starting to notice key areas of resistance against the crown. The intolerable acts, the stamp act, the tea act, etc., were placing a burden on the relationship between the colonies and the crown. The appearance of the British Captain Webb, in full uniform, carrying a sword and walking into a private meeting of local Methodists alarmed the worshipers. Deciding to proceed as planned, the small group opened with a Charles Wesley hymn. When they noticed the stout captain singing along with them, the fear subsided. At the completion of the hymn, Captain Webb introduced himself as one of Wesley’s itinerant preachers. The group promptly offered him to preach.

According to Mr. E. Ralph Bates in his book, Captain Thomas Webb, Anglo-American Methodist Hero, “The Captain’s preaching immediately increased the congregation. His speech had uncommon power. John Adams, the second President of the United States, said he was one of the most eloquent men he ever heard; some even compared him with Whitefield.”

Over the next nine years, Captain Thomas Webb would establish several key Methodist societies in the colonies of New York, New Jersey, Delaware, and Pennsylvania. Mr. Bates called him “Laymen Number One.” But the darkening clouds of imminent war with Great Britain and Webb’s unwavering support of the crown soon altered his ability to break new ground in the colonies for the Gospel.

America’s saving grace when it came to early Methodism in the colonies facing the inevitability of war with England was the astute effort of Captain Thomas Webb in 1771 to write John Wesley, pleading for competent preachers to take up the heavy load. One of those young men sent by Wesley in September of 1771 was Francis Asbury, the only English preacher to remain in the colonies when war with Great Britain broke out in 1776.

After several incidents with colonial authorities, the remarried Captain Webb and family departed the colonies sailing back home to England on October 18th, 1778.  He was the last of the English Methodist preachers to depart for home.