Black Country is the story of the early life in England of British preacher, Francis Asbury, the George Washington of American Christianity. The 735-page book is also the first “panel” of this 21st-century triptych. Black Country opens with the tragic account of the 16th-century Oxford Martyrs, Englishmen who lost their lives on account of printing the Bible in English. By the end of the first chapter, 18th-century England is no longer yearning for the faith of the Oxford martyrs two centuries before- portrayed as a nation that has abandoned the faith and wrestling with 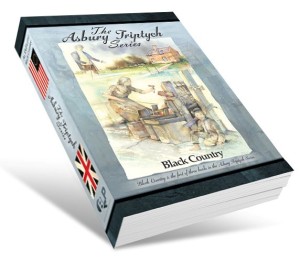 rampant illiteracy and a populace addicted to gin. Despite the seemingly insurmountable opposition of a misinterpretation that the religious movement Francis Asbury attaches to is seditious and against the king, Francis Asbury and his fellow preachers remain loyal to their leaders John Wesley and his brother Charles Wesley as they lead an effort that attempts to transform a nation. Like his mentor, John Wesley, Francis Asbury travels about on horseback, braving mobs seeking to drown him, smugglers aiming to end his ministerial career and irreligious individuals who are determined to harass the young preacher. In the midst of these difficult circumstances, the young Francis Asbury perseveres, encouraged by his parents, his childhood friends, and his girl.

Black Country is the opening book of The Asbury Triptych Series. The initial story of the trilogy is told from the rugged West-Midlands of England, the iron-working capital of 18th-century Great Britain. The region gains its name from the rich coal deposits which exist in the West-Midlands of England. The region also receives this moniker on account of the darkened skies from the unavoidable by-product of the numerous blast furnaces of the iron-working industry. Nearly 20 hours each day they pour black smoke into the skies.

Black Country also features the key individuals who launch this religious movement of John Wesley to the American colonies, people like George Whitefield, Lord Dartmouth (Founder of Dartmouth College), and Lady Selina, The Countess of Huntingdon (also a founder of Dartmouth College when she gave funds to the Mohegan preacher from the American colony of Connecticut, Samson Occum). Also, in Black Country are American notables, Benjamin Franklin, and Dr. Benjamin Rush.  Each of these individuals contributes to this rich story abounding with the shared history of England and America. 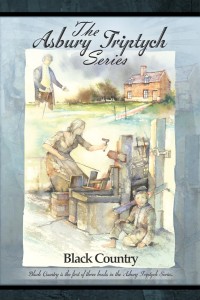 Black Country uniquely delivers a portion of Francis Asbury’s life never written about before. In the nearly two centuries since the death of Francis Asbury, Black Country is the first to detail the early preaching circuits of this young itinerant. Francis Asbury’s ministry takes him to the beautiful 18th-century English countryside. The rich history of the 18th-century counties of Hampshire, Wiltshire, Staffordshire, Derbyshire, Essex and Worcestershire come to life as Francis Asbury diligently spreads the life-changing news of the Bible. In Black Country, the religious hot spots of London also come to life as Francis Asbury experiences the large congregations of the Tottenham Court Road Tabernacle of George Whitefield and the artillery foundry of King Charles I, remodeled into John and Charles Wesley’s Foundry Church.

Surviving the risks and dangers of the Black Country, Francis Asbury has an important decision to make.  Shall the twenty-six-year-old remain in his homeland where his loving parents, a woman fond of him, a career as a preacher and his life-long friends reside?  Or, shall he risk his very life, crossing the treacherous Atlantic Ocean on a voyage to a virgin forest known as America?  The city of his destination is broiling in an anti-British hatred as the English king pushes his intolerable acts on his colonial citizens.  Francis Asbury’s potential help in the new land, the England-born preachers who preceded him to the colonies, are in the process of exiting the American settlements- certain that unrest and war are on the horizon.  Even with his hesitation to leave, he senses more, a deeper purpose which calls him.

Despite his love for his country, Francis Asbury eventually gives in to God’s call to leave his homeland and cross the hazardous Atlantic Ocean for the American colonies. On the eve of the American Revolutionary War between the colonies and his beloved England, Asbury sails for America.

One of the most dangerous aspects of being a child in the 18th-century Black Country was the time spent with a parent in the dangerous occupation of ironworking. Many experienced death or dismemberment by tragic events linked to an exploding blast furnace or a pounding treadle hammer. The West Midlands of England was also a dangerous place for children because of kidnappers who sold them to the slave ships heading for Africa. Most of the abducted boys and girls died prematurely of starvation and fatigue on a Caribbean Island plantation. If the trades and the slavers didn’t kill them, the streets full of thugs and anti-Methodist mobs, set on death and persecution of those thought to go against the Church of England, accounted for nearly the rest of the child deaths of the region.

Black Country also details the violent opposition to the Wesleyan movement, an opposition that is blind to the good that can only be attributed to the Wesleyan efforts.  John Wesley’s reviving of the populace occurs outside of the Anglican Church.  This development does not sit well with the church’s leadership. The Anglican Church does all it can to squelch the awakening.  Fortunately, their efforts fail, but not without inflicting pain and discomfort on the Wesleyan faithful.

During this fierce resistance to the Wesley brothers‘ culturally uplifting efforts, Francis Asbury’s apprenticeship in England’s iron-working industry begins. Black Country‘s depiction of Francis Asbury’s childhood struggles includes the loss of his older sister and a school instructor that beats him and his entry into the iron trade. These pivotal experiences become the inciting incidents launching Francis toward his destiny.

For the first time, Black Country sets out to detail the fun and significance of Francis Asbury’s first adolescent friendships, his friendship with Edward Hand and Richard Whatcoat, his buddies, Thomas Ault, younger brother Jabez Ault, James Bayley, James Mayo and Thomas Russell. Not left out is his relationship with Nancy Brookes and eventually, his calling as one of Wesley’s worthies.