The year is 1759; a man of German descent is struggling in Limerick County, Ireland.  He is successful at his job, a talented carpenter.  He is successful at his marriage, happily married to his wife Mary.  He is a local preacher with the Wesleyan movement in the Limerick town of Ballingrane.  What does this man of solid commitments desire?  His problem?  He desires to be a traveling preacher for John Wesley and Wesley just turned him down for a circuit.  Instead, he placed Philip on a list of reserves.

Philip Embury is a direct relative to the German citizens forced out of the Palatine region along the Rhine in Germany in the beginning of the 18th century.  His family eventually settled on the Southwell Estate in Limerick in 1709.

Lord Southwell is generous, but his unselfish sharing is ending.  In 1759, the rents on the estate will triple.  Philip and his wife Mary accept the inevitable, they must move.  They also realize that they must do as many others in the community are doing, leave for America.

Philip, his wife Mary and several other families embark for the colonies in America.  Among the group are Mr. and Mrs. Paul and Barbara Heck.  They too, longtime residents of Ballingrane and friends with Philip and Mary Embury.  All arrive America in August of 1760. 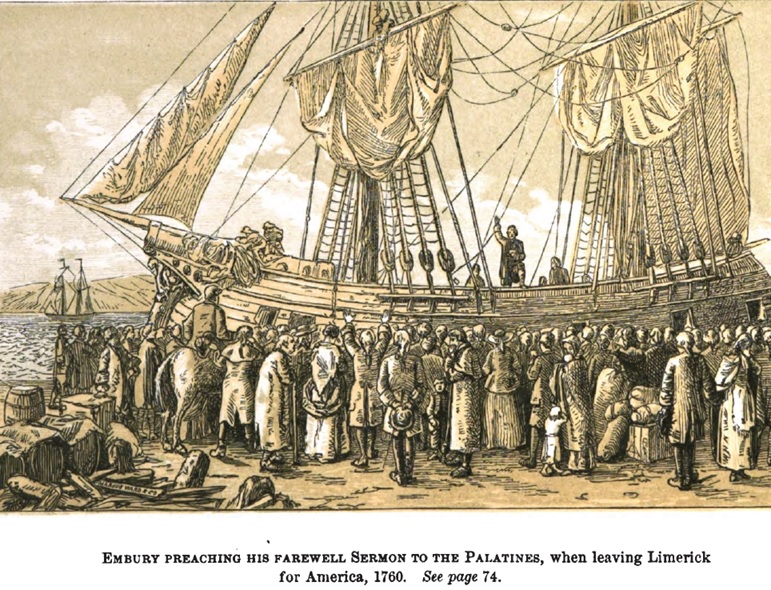 In New York, Philip quickly immerses himself in providing for his family.  The same holds true for the other Methodist families like Paul and Barbara Heck.  Although Philip never abandones family devotions, his preoccupation with making a living keeps him from preaching altogether.

In 1765, another ship full of Ballingrane residents arrives to the port in New York.  These are the many friends of Philip and Mary; several of the men are his closest companions.  By this time, many of Philip’s friends have sadly abandoned their religious practices, and have become comfortable with card playing and other sinful amusements.  Surprising to the Embury and Heck families, several of these close friends of Philip are adamant in their disdain of religion.

Philip decides he will not participate with his changed friends.  He patiently seeks to better his life in the new country of his choice.

One evening in the autumn of 1766, the usual gathering of men, loudly playing cards assembles a few houses down from the Embury and Heck families.  The liquor flows freely, the abusive language as well.  As the men continue in their state of depravity, Barbara Heck bursts into the room.  Filled with rage for the ongoing, she sets out to end the debauched behavior.  Pushing aside the men, she reaches over and around the inebriated gamblers, picks up the cards that lay on the table and throws them into the lit fireplace.  Not content to stop, she gathers up the liquor and disposes of it as well into the fire.  She delivers a condemning pronouncement and storms out of the home.

Making her way two doors down to the home of Philip Embury, she thrusts herself into his main room also.  Startled at the unexpected intrusion, Philip stands to his feet.  Barbara promptly places herself within inches of Philip’s face and delivers,

“Have you forgotten Ireland?  God is going to require their blood at your hands.”

Not knowing what to say, Philip attempts to gather a response.  Barbara interrupts,

“Brother Embury, you must preach, lest we shall all go to hell.”

“How can I preach, I have neither house nor congregation?”

“You can preach in your own house.”

Within a few days, Philip gives notice that he is going to preach.  He does, to a congregation of five people.  This is the beginning of the John Street Methodist Church in New York.