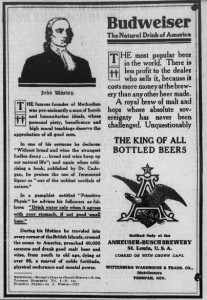 At first reading, I was somewhat confused. Why was this advertisement mentioning John Wesley? Was it a reflection of a more religious time in America’s history, one where they honored those who clearly influenced the successful founding of this great nation? Or was it something else? It soon dawned on me that the timing of the John Wesley Budweiser Beer ad occurred in the heart of the American Temperance Movement that was painstakingly attempting to outlaw spirituous liquors in the United States. The thought began to sink that Budweiser was attempting to battle the growing movement that was attempting to end the sale of liquor, beer and wine in the United States. 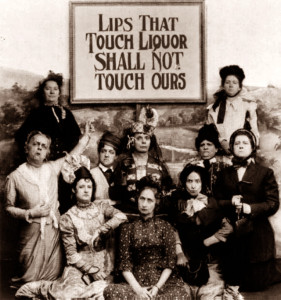 January 16, 1919, was the culmination of a movement that started nearly a century before. On this date in the early twentieth-century, the United States Constitution was amended for the eighteenth time. The 18th Amendment clearly spelled out what many civil leaders, including several generations of men and women alike, yearned to achieve. The amendment reads as follows:

Section 1. After one year from the ratification of this article the manufacture, sale, or transportation of intoxicating liquors within, the importation thereof into, or the exportation thereof from he United States and all territory subject to the jurisdiction thereof for beverage purposes is hereby prohibited.

Section 2. The Congress and the several states shall have concurrent power to enforce this article by appropriate legislation.

Section 3. This article shall be inoperative unless it shall have been ratified as an amendment to the Constitution by the legislatures of the several states, as provided in the Constitution, within seven years from the date of the submission hereof to the states by the Congress.

Thirteen months later on January 16, 1919, the Eighteenth Amendment was ratified.

The Temperance movement was originally started by women who with their children, suffered as a result of men in their lives who abused the consumption of intoxicating liquors. Their initial efforts focused on the return of moderation. Eventually, this movement morphed into pushing for complete abstinence. The movement’s main focus also dovetailed with America’s strong Christian faith which permeated much of the culture. The warnings of the Bible, coupled with the evidence of real life tragedies powered the outspoken men and women of this movement. Uniquely, many business owners of the day were also part of this movement, they too had experienced real-life tragedies in lost productivity from their workers who were either drunk on the job or too intoxicated to show up for work. Adding to the proliferation of alcoholic abuse was that at this time in American history, intoxicating drink was cheaper to purchase than clean water.

Long before the American Temperance movement, the yearning to curve the abusive consumption began in Europe when in the 1820’s the movement moved through Ireland, Scotland, and Great Britain. Fifty years before, much of Great Britain was finally making progress away from the rampant addiction to Gin. Much of this success attributed to the brave efforts of John Wesley from the 1740’s to the 1780’s.  About the same time as the Irish and Scottish movement, another branch of this effort materialized in Sweden and Norway, eventually making it to the shores of America. 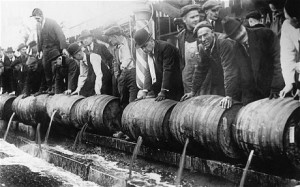 In America, the first state to pass a law against the consumption of intoxicating drink was Maine. On June 2, 1851, the state of Maine passed this law which soon became the role model legislation for other states of the union.

Two notable women who promoted the Temperance Movement were Susan B. Anthony, the matriarch of women’s rights and Carry A. Nation, a strong supporter of Prohibition, women’s suffrage and women’s rights. She had lost her first husband, the father of her first child, to death by alcohol abuse.

On August 19, 1908, the edition of the religious paper, The Western Christian Advocate, a publication originating in 1834 and published from Cincinnati, Ohio, printed a rebuttal to this John Wesley Budweiser Beer ad. The title of this editorial answer to the advertisement was A Vile Brewers’ Slander. The arguments against this John Wesley Budweiser Beer ad argument are listed in great detail. Below are some of the key points from the article:

“Of course, it is very easy to point out that, even were all this true, Wesley was born more than two centuries ago, (now three centuries), and lived and wrote in a day when comparatively no one recognized in any adequate degree the evil of drink. It is easy, too, to point out that Wesley was a pioneer in recognizing the drink evil and that his utterances upon many points connected with the drink evil would be considered radical even today.”

The article about the John Wesley Budweiser Beer ad doesn’t stop there. The writer quickly points out that:

“The brewers’ advertisement makes three references to Wesley’s writings. Each of them is a falsehood or a misrepresentation amounting to a falsehood.”

I quote from The Western Christian Advocate as the writer dives into each of these:

As a reference to confirm this quotation the advertisement gives the comparatively unknown English book, ‘Wesley’s Place in Church History,’ citing page 202. A reference to that book shows not only that this passage did not appear in any of Wesley’s sermons, but that it is not a quotation from Wesley at all. The brewers’ own citation shows that these words are part of a quotation from a treatise upon the Christian sacrament by Dr. Brevint, one-time dean of Lincoln. Dr. Brevint, emphasizing the necessity of sustenance for the soul, said: ‘Now, as without bread or wine or something answerable to it, the strongest bodies soon decay, so, without the virtue of the body and blood of Christ, the holiest souls must soon perish.’

It will be noted that the brewers’ advertiser can not even quote honestly, since he omitted the significant words ‘or something answerable to it,’ thus adding to the dishonesty of his attempt to foist upon John Wesley the utterance of an altogether other person.

Again when criticising a book published by Dr. Cadogan, he praises the use of fermented liquor as ‘one of the noblest cordials of nature.’

By the term ‘fermented liquor’ the brewer evidently intended that we should understand beer, a total misrepresentation, as we shall see.

The passage to which reference is made is found in Wesley’s Journal, under date of October 9, 1771, at a time when Mr. Wesley still seems to have believed- as many poorly informed people believe today- that wine has some medical value. Mr. Wesley tells us that he had been reading a treatise by Dr. Cadogan on ‘Chronical Distempers.’ This book opposed the heredity theory of disease and attributed most diseases to indolence, intemperance, or irregular passions. After reading this book, with which he expressed his agreement in the main, Mr. Wesley writes in his Journal, volume ii, page 358: ‘But why should he condemn wine toto genere, which is one of the noblest cordials in nature?’

At the fullest value which can be attributed to the passage, Mr. Wesley meant nothing more than to say that he believed wine to have a medical value. What he thought of wine-drinking we shall see later.

The third statement of the brewers’ advertisement is the assertion that in his quaint little book entitled ‘Primitive Physic,’ Mr. Wesley advises people against the use of water and in favor of beer. The language attributed to Mr. Wesley is:

‘Drink water only when it agrees with your stomach: if not, good small beer.’

As we shall see, this is a gross misrepresentation.

It is interesting to inquire what Mr. Wesley might have meant by ‘small beer,’ since the term is now almost wholly unknown except in a figurative expression of common use to indicate contempt for some person or thing.

The ‘small beer’ of Mr. Wesley’s day was beer of very light alcoholic content, commonly a home-made brew which was not suspected of intoxicating properties. Mr. Wesley would doubtless have been shocked at the idea of recommending to any one the use of an intoxicant.

The passage which is here misquoted is found in the preface of the little book, and correctly reads:

‘Drink only water if it agrees with your stomach: if not good, clear small beer.’

The transposition of the ‘only’ and the other changes in the sentence mean nothing other than deliberate fraud.

‘Water is the wholesomest of all drinks: quickens the appetite, and strengthens the digestion most. Strong, and more especially spirituous liquors are a certain, though slow, poison. Experience shows there is very seldom any danger in leaving them off all at once. Strong liquors do not prevent the mischiefs of a surfeit, nor carry it off, so safely as water. Malt liquors (except clear small beer, or small ale of due age) are exceedingly hurtful to tender persons.’

The words in parenthesis in the closing sentence concerning malt liquors are wholly omitted in some editions of the book. The expression ‘strong liquors,’ followed by the words ‘especially spirituous,’ leave no doubt that Wesley regarded strong beer and wine as ‘certain poison.’ “

What of John Wesley’s personal habits? Considering that the arguments made above in The Western Christian Advocate clearly point away from the accuracy of the John Wesley Budweiser Beer ad, is there anything in the personal life and habits of John Wesley that would lend credence to Budweiser’s attempt to link beer with John Wesley?

As expected, there is no valid indication to show that John Wesley would have approved of being on an advertisement for beer.

In John Wesley’s day, total abstinence was virtually unheard of, yet that is exactly how John Wesley lived.

According to The Western Christian Advocate article, “He was a total abstainer. From spirituous liquors, which were at that day, and even at a much later period, the only alcoholic drinks that even the most radical considered dangerous, he was a total abstainer during his whole active life, as is evidenced by numerous passages in his writings and by the rules which he wrote for his religious societies as early as 1743.”

His rule in 1744 reads as follows, “To taste no spirituous liquor, no dram of any kind, unless prescribed by a physician.”

John Wesley’s writings do indicate that there was a period where he partook of wine, but that this was on his return from America in an attempt to remedy a medical condition. His writings indicate that he soon left off wine and quickly gained better health.

The article in The Western Christian Advocate is to the point when it asks:

“Does the Anheuser-Busch crowd for a moment fancy that, if John Wesley were alive today, he would look upon the drunkenness and woe that they create and withhold his curse?”

The article in The Western Christian Advocate closes with this statement:

“The attempt to use this morning star of Prohibition as an advertisement for a beer saloon is an outrage that ought to bring down upon the lying brewers who perpetrated it the vengeance of every Methodist, every Christian, every honest man- at the ballot box.” These words seemed to have resonated on the listening nation as Americans successfully fought and won the prohibition of intoxicating liquors. Unfortunately for them, these efforts were short-lived. Fourteen years later in 1933, the Twenty-first Constitutional Amendment repealed the Prohibition of the Eighteenth Constitutional Amendment. 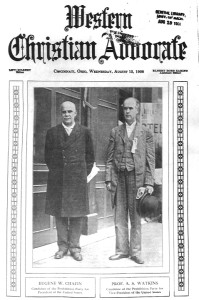 To be honest, I did not spend time researching the Prohibition Political party, however, I did come across this photo of the candidates for President and Vice-President for the official, Prohibition Party. At some point in the political process, the men obviously lost to William Howard Taft and James S. Sherman, the men who took office as president and vice-president in 1909. 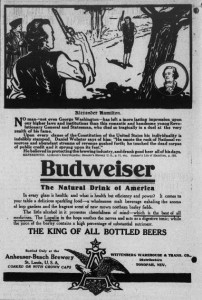 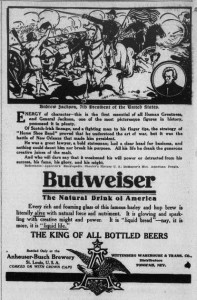 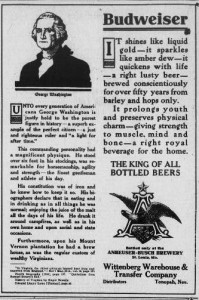 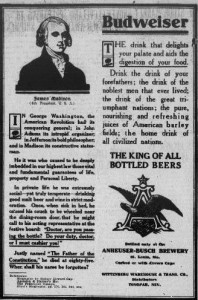 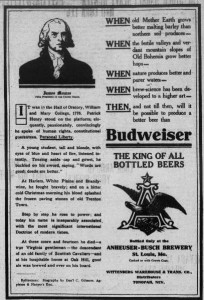 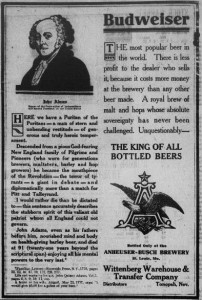 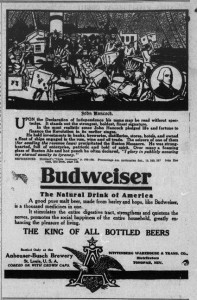 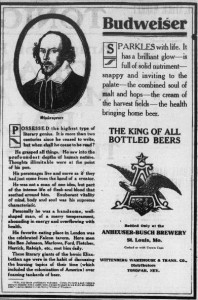 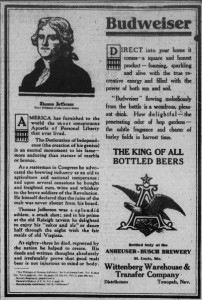 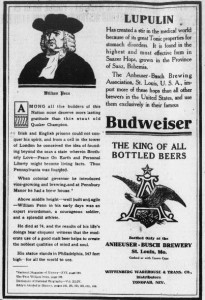