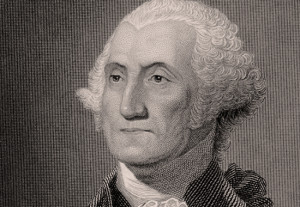 Diary of George Washington, Wednesday, May 25, 1785: “Expected General Roberdeau and some Methodist clergyman to dinner but they did not come.” In addition to these words, General George Washington penned that the day’s temperatures were very comfortable, “Mercury at 64 in the morning- 67 at noon and 70 at night.”

The general which George Washington referenced in his personal diary was the Brigadier general of the Pennsylvania militia, Daniel Roberdeau. Before the American Revolutionary War, Daniel Roberdeau was a Philadelphia merchant. Most of his business consisted of West Indies trade. The two Methodist clergyman referenced in the diary of George Washington were Francis Asbury and the new arrival from England, Dr. Thomas Coke.

The decision to call himself Bishop Francis Asbury is slightly controversial. Some historians indicate that in light of the informality of the American Methodist movement, Francis Asbury was making a mistake taking on this title. However, it is this author’s and historian’s opinion that when Francis Asbury took on the title, Bishop Francis Asbury, he was actually poking fun at the Anglican leadership back in England. If this is a prank or light-hearted quip, it is obviously a result of his experience as a young preacher in England before leaving for the American Colonies in September of 1771. There he saw firsthand the abuses of the Anglican leadership who was far from the Christ-like leaders their title required.

General George Washington’s diary entry of May 26, 1785, reads as follows: “Thursday 26th. Mercury at 65 in the morning- 68 at Noon and 67 at Night. Wind southerly and warm in the forenoon and till about 5 o’clock afternoon when clouds to the westward arose attended with high wind from the No. West (Northwest). Which continued an hour or two & changed the temperature of the air remarkably. Rid to Muddy Hole and The Neck plantations. Upon my return found Mr. Magowan and a Doctr. Coke & a Mr. Asbury here- the two last Methodist preachers recommended by Genl. Roberdeau- the same who were expected yesterday… After dinner, Mr. Coke and Mr. Asbury went away.”

This diary entry indicates that Francis Asbury and George Washington met for dinner on May 26, 1785. Along with the proper introductions from General Daniel Roberdeau, other items were discussed.

Looking at the diary of Dr. Thomas Coke, the Welsh missionary sent by John Wesley to aide Francis Asbury in superintending the American Methodist circuits, we see the following entry:

“Thursday 26th, Mr. Asbury and I set off for General Washington’s. We were engaged to dine there the day before. The general’s seat is very elegant, built upon the great river, Potomac, for the improvement of which, he is carrying on jointly with the State some amazing plans. He received us very politely and was very open to access. He is quite the plain country gentleman. After dinner, we desired a private interview, and opened to him the grand business on which we came, presenting to him our petition for the emancipation of the negroes, and entreating his signature, if the eminence of his station did not render it inexpedient for him to sign any petition. He informed us that he was of our sentiments and had signified his thoughts on the subject to most of the great men of State: that he did not see it proper to sign the petition, but if the Assembly took it into consideration, would signify his sentiments to the Assembly by a letter. He asked us to spend the evening and lodge at his house, but our engagement at Annapolis the following day would not admit it. We returned that evening to Alexandria, where at eight o’clock after the bell was rung, I had a very considerable congregation.”

“We waited on General Washington who received us very politely and gave us his opinion against slavery.”

The above encounter at the home General George Washington lends insight into the man known as Bishop Francis Asbury. The words bold, confident and focused come to mind. In many ways, Francis Asbury was very much like George Washington. Both men were “plain country gentleman,” George Washington from the hills of Virginia and Francis Asbury from the “hills” of the West-Midlands of England. Neither considered themselves part of upper-class society. These were authentic men of their word, men who spoke volumes not with empty words but through their profound actions.

Both Francis Asbury and George Washington were good with leading people. At this point in the ministry of Bishop Francis Asbury, Francis Asbury had proven himself the uncontested leader of the American itinerants. This was quite an accomplishment by a man who wasn’t even a citizen of America. The spiritual gift of Francis Asbury was the gift of administration. This accomplishment undoubtedly a result of his selfless dedication to his Biblical troops. Much in the same way, George Washington proved his loyalty to his men through the countless efforts of leading his men into battle. His leadership during the American Revolutionary war was handed to him by his peers, the leaders of the Continental Congress.

Both Francis Asbury and George Washington paid their dues early in life. For Francis Asbury, his life in the West-Midlands of England was marked by religious persecution. Many of the leaders of the Anglican Church considered the Methodist movement as heretical fanaticism. In addition, the not-so-religious citizens of England and Ireland saw the Methodist movement as seditious against the king. Francis Asbury personally experienced physical and verbal abuse as a young preacher in England. For George Washington, he paid his dues early through his career as a surveyor and his failings as a leader in the French and Indian War. George Washington was a big part of one of the biggest battles lost during this war with France. 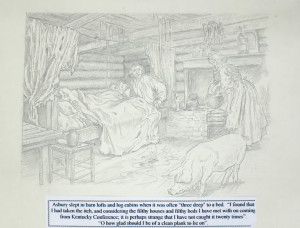 Another similar characteristic of Francis Asbury and George Washington is that by 1785, both men were household names in the original 13 colonies. For Francis Asbury, this was accomplished by the simple fact that he nearly traveled to every community existing in the colonies. Although he had not yet ventured into the region of New England, he had seen the majority of the remainder of the infant nation. In addition, he personally ate dinner with most of these individuals. And in many of their homes, slept in their beds. Usually several to a bed! Asbury on the filthy conditions he sometimes had to sleep in, “O How glad should I be of a clean plank to lie on.”

Click on the Richard G. Douglas rendering of Francis Asbury’s typical stay in an American colonial home. I love the pig walking about the main room of the house. Better yet is how the rain is dripping through the roof! Do you see it?