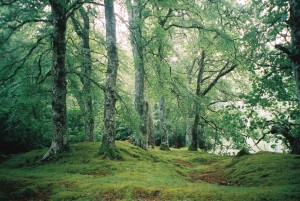 Clearly shorthanded for such a large circuit, Francis Asbury and William Orpe set out to cover the large Staffordshire circuit, a preaching chore which encompassed the Black Country towns of Birmingham, Wolverhampton, Willenhall, Walsall, Wednesbury, Darlaston and Billbrook. In addition to these Black Country towns who in the past had dealt sharply with John Wesley, the low end of the circuit, known as the Staffordshire “Low Round” covered the towns of Worcester, Tewkesbury and Gloucester. This entire circuit, the low and high rounds, was beyond large, it was immense, spanning more than one-hundred-twenty miles in a straight line. Despite the almost insurmountable task, the young pair did their best, Francis Asbury primarily in his familiar territory of the upper end of the Black Country and William Orpe handling Worcester, Tewkesbury and Gloucester. 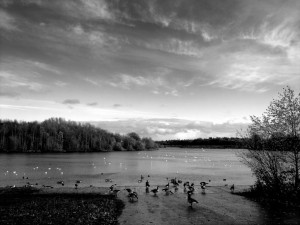 Unknown to William Orpe was the fact that the familiar high round of the Staffordshire circuit was actually beginning to frustrate the young Francis Asbury. He had been preaching in these towns for more than one year when first asked to aid John Wesley’s movement as a local preacher. Despite his happiness with his new career now as an itinerant on trial, Francis Asbury struggled with a sense that his familiar territory somewhat limited his efforts. To Francis Asbury, he needed to venture out.

Added to this dissatisfaction is the fact that at this time in his life, Francis Asbury was still living at home with his parents. This fact furthered his frustrations with towns he had been preaching and teaching in for a long time, actually since his original calling as a local preacher years before. Clearly by now, Francis Asbury expected to travel to far away, interesting destinations. Actually, when you count his early experiences as a teenager, he had been preaching in these Black Country towns for the last five years. Some of these places earlier as a very young teenager- when he was allowed to preach as his mother’s companion to local prayer meetings. The deep-seated set up to this “Francis Asbury disciplined” event was at this point and time that he expected much more in the way of travel and responsibility. 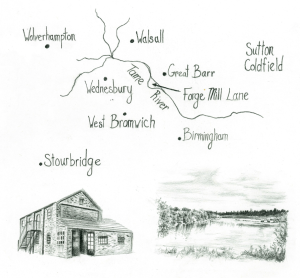 Staffordshire
High Round
Drawn and Used with Permission by
Tyler Fegley

Departing this disappointing meeting, Francis Asbury aimed for his next required preaching engagement, a familiar stop in Billbrook. After his mandatory preaching to the locals of Billbrook, Francis Asbury did the unthinkable – he disregarded William Orpe’s assignment and ventured out on his own.

From the written notations of Francis Asbury, it is clear that he exited the town of Billbrook and headed for new territory. The first stop was the town of Stafford. After attempting to preach in Stafford, he turned for the villages of Stone, Newcastle, and Ashbourne. Ashbourne he had visited years before with the Scottish itinerant and mentor, Alexander Mather. All seemed to go well for the young, disobedient itinerant. But somehow, William Orpe found out about the headstrong act of Francis Asbury. Perhaps, William Orpe’s opinion of Francis Asbury was formed in the short time that the two worked the Staffordshire circuit together, perhaps others had warned and advised a test. However this knowledge came about, William Orpe immediately set out to enact this “Francis Asbury disciplined” event.

As a result, of the obvious insubordination by Francis Asbury, William Orpe penned the following letter to Francis:

After having so firmly engaged you to supply Hampton and Bilbrook at the end of the week, I could not but be surprised to hear you are turned dictator. Certainly, you must either think I was not able to see the places properly supplied or else that I am fickle and inconsistent, and therefore you expect to hear my new mind. I take this opportunity of informing you that I shall not be at those places, and shall expect you to see them supplied in due time. It is true another preacher is come, but he goes immediately into the low round. In the meantime, I wish you would hearken to those verses of Hesiod,(A Greek farmer-poet from the eighth century BC. He lived about the same time as Homer, author of the Iliad). “Let him attend his charge, and careful trace the right-lined furrow; gaze no more around, but have his mind employed upon the work.” Then I should hope to hear that your profiting would appear unto all men. You have lost enough already by gazing all around; for God’s sake, do so no more. I wish that I might see you on your return from Hampton on Sunday evening. I shall be at Wednesbury if it pleases God. I have a little concern to mention. I hope you’ll call.

I remain yours affectionately,

The immediate response for Francis Asbury to this “Francis Asbury disciplined” event seems to be one of self-preservation. On the back of the letter which Francis Asbury received from William Orpe, Francis detailed his last few weeks which clearly were not in line with his assignment. Examination of the preserved letter reveals that Francis Asbury wrote the following thoughts onto the letter:

My brother, if the same you be,

I hope in the time appointed you’ll visit me.

And then for Stone

And then for Newcastle

And then for Ashbourne

And then William Gibson 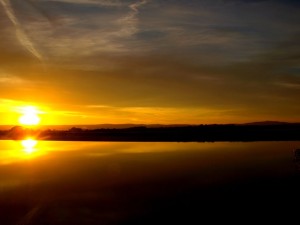 River Severn Gloucestershire Francis Asbury Disciplined
River Severn
Gloucestershire
The following account plays out in the book, Black Country. Al DeFilippo created this scenario based on research of the early circuits of Francis Asbury in England. Another article covers these circuits in more detail. In Black Country, the account goes as follows: in the mind of Francis Asbury, the summer of 1766 conference also did not go well for the young itinerant from the Black Country. Once again he was assigned to the high round of the Staffordshire circuit, and once again, he was assigned under the leadership of William Orpe. This assignment was upsetting to Francis Asbury. Ignoring the letter of William Orpe from the previous spring and worse yet, the assignment by John Wesley, Francis Asbury pushed his Scottish mentor, Alexander Mather, to overrule the assigned circuit from William Orpe. Despite his young and inexperienced willingness to go to the Staffordshire low round, Francis Asbury was successful. 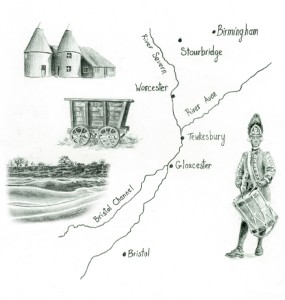 Staffordshire Low Round
Drawn and Used with Permission by
Tyler Fegley

For the next twelve months, Francis Asbury experienced the dark side of the Staffordshire low round. Numerous near-death experiences from the anti-Methodist mobs of Staffordshire’s low round found a frightened Francis Asbury considering the possibility that he made a mistake. In one tragic event, he is nearly drowned in the River Severn. The devastating events along with the inescapable self-doubts resulting from these experiences drove Francis Asbury to his lowest point emotionally.

One of the obvious questions from this event is whether or not Alexander Mather knew beforehand that Francis Asbury would experience such troubles in the Staffordshire low round. Moreover, in the book, Black Country, the opening book of The Asbury Triptych Series, the advice given to Francis Asbury from his long-time mentor, Alexander Mather is priceless:

“Opposition is to be expected, but with disobedience, you only further its effects.”