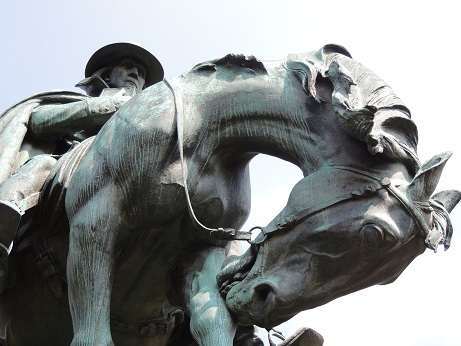 Francis Asbury’s ministry to the Colonies is one of America’s greatest untold stories.  His ministerial and cultural efforts to reconcile European, African, and the Native American populace are peerless.

More than a century later, President Calvin Coolidge dedicates a Washington D.C. equestrian monument to the young pastor from England.  He calls Asbury the “prophet of the wilderness” who is “entitled to rank as one of the builders of our nation.”  On a different occasion, Asbury receives recognition by the National 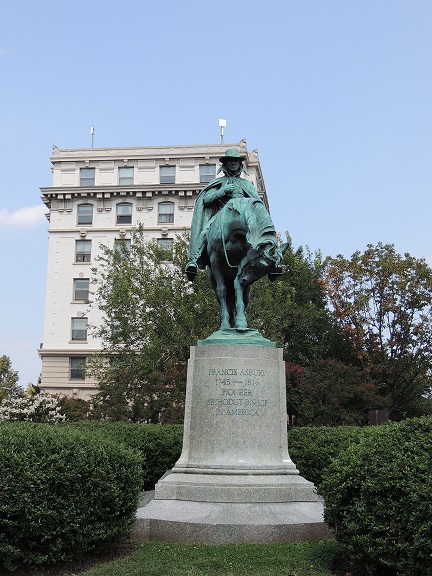 Historical Publication Commission (NHP) of the United States as one of the sixty-six American citizens “whose works are essential for the understanding of the development of the American nation and its strategic place in world history.”  Both houses of Congress agree to publish his writings.  According to the Wesley Center Online, (http://wesley.nnu.edu/other-theologians/francis-asbury/the-journal-and-letters-of-francis-asbury-volume-i/francis-asbury-the-journal-vol-1-introduction/ ), recommending them for “proper editing and publication, along with Washington, Jefferson, Adams, Lincoln, and the other immortals of the land.” This proclamation, coupled with the fact that Asbury arrived to America and practically remained “in the saddle” for 45 years without owning a home in effect makes Asbury America’s British Founding Father.

The recommendation of the congress launches the three volume Journal and Letters published in 1958.

Three decades before the NHP Commission acknowledgement, Congress gives approval to the Francis Asbury Memorial Foundation to erect a granite and bronze equestrian statue of the traveling preacher.

Five years after the February 29, 1919 congressional approval, President Calvin Coolidge dedicates the statue.  Included is a picture from the October 15, 1924 event. 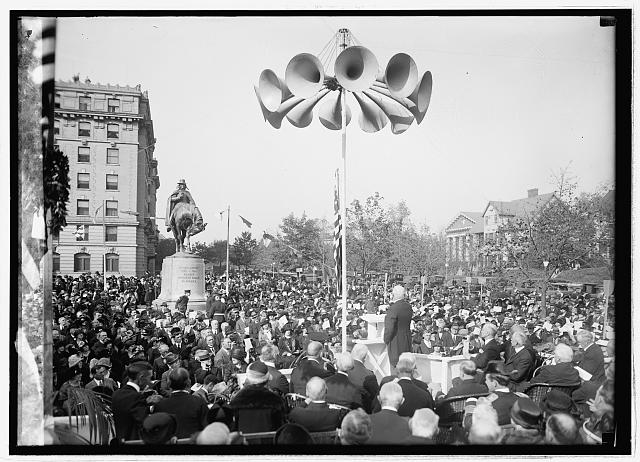 Immediately the picture draws you to the immense crowd that gathered that autumn day at 16th and Mount Pleasant Street in Washington D.C.  In addition, the speaker at the podium is none other than President Calvin Coolidge.

Coolidge’s words are stellar: “Our government rests upon religion.  It is from that source that we derive our reverence for truth and justice, for equality and liberty, and for the rights of mankind.”  More from Coolidge, “The government of a country never gets ahead of the religion of a country. There is no way by which we can substitute the authority of law for the virtue of man.”

Consider his words about Asbury, “It was because of what Bishop Asbury and his associates preached and what other religious organizations, through their ministry, preached, that our country has developed so much freedom and contributed so much to the civilization of the world. It is well to remember this when we are seeking for social reforms.  If we can keep in mind their sources, we shall better understand their limitations.”

Coolidge has more, “It is more than probable that Nancy Hanks, the mother of Lincoln, had heard him in her youth.  Adams and Jefferson must have known him, and Jackson must have seen in him a flaming spirit as unconquerable as his own.  How many temples of worship dot our landscape; how many institutions of learning, some of them rejoicing in the name of Wesleyan, all trace the inspiration of their existence to the sacrifice and service of this lone circuit rider!  He is entitled to rank as one of the builders of our nation.”

Truly, a great day, one wishes they could have been there.

As a musician, I strangely gravitate toward the pole in the center of the photo.  Clearly the most up to date technology of the day.  Those crazy 20th century sound men.