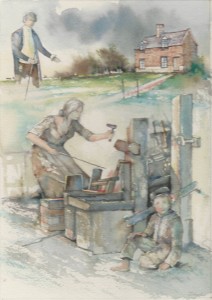 John Hurst and Richard Douglas are two Asbury artists who have contributed images of Francis Asbury to The Asbury Triptych Series. The front cover illustration of the opening book in this trilogy, Black Country, was painted by John Hurst. His beautiful watercolor rendering of an 18th-century mother, standing in front of a burning furnace and pounding iron to forge nails for the trades serves as a stark reminder of the difficult times of the middle of the 1700’s.

I was drawn to the image of the child, sitting dangerously close to the furnace. This was standard procedure for mothers whose husbands were involved in the small, family-run nail shops. As the fathers were off, gathering coal to burn in the furnaces or bars of iron to be melted into nails, the children spent most of the working hours hovering dangerously close to their hammer-wielding mothers. When the kids were old enough to contribute, they were put to work, spending anywhere from twelve to sixteen hours six days each week. 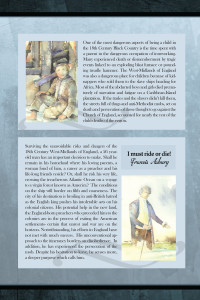 For more on the fine watercolor paintings of John Hurst, a true Asbury artist, please visit his website, Marshland Arts.

The sequel to Black Country is Beggar Bishop. The Asbury artist who will contribute the illustration for Beggar Bishop is Richard Douglas. 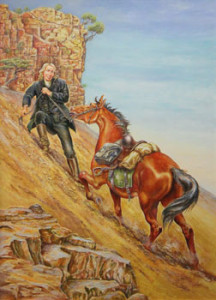 As mentioned in a previous post, Richard Douglas has contributed two illustrations for The Asbury Triptych Series. The first work for Beggar Bishop depicts the trials of Francis Asbury as he strives to forge a church in the American Colonies. This Asbury artist captures the external and internal struggles of this young itinerant preacher braving the wilds of a virgin land. 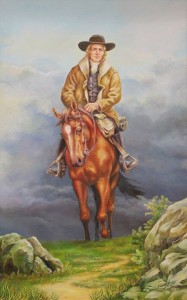 The third book, Ordination, receives another fine work by this Asbury artist. The fine oil painting by Richard Douglas captures the heart of Francis Asbury, a man accustomed to wandering about, spreading the Gospel message. The blue jacket from his homeland has been traded in for a buckskin jacket, the native garment of his adopted homeland. His sturdy horse, escorting him over the summit of an unforgiving terrain, is a trademark of the perseverance of Francis Asbury. His unceasing efforts helping to forge a church throughout the early colonies.

I am grateful for the fine work of these Asbury artists. John Hurst and Richard Douglas are two individuals who are helping me to create a series on an incredible historical figure, far beyond my natural abilities. Thank you, John and Richard.