If you haven’t heard about it, Southern Methodist University in Dallas, Texas is running a five-month-long exhibition to honor the upcoming bicentennial celebration of the anniversary of the passing of Bishop Francis Asbury. As many of you already know, Bishop Asbury departed this life for eternity on March 31, 1816.

The SMU exhibition appears to be an extensive display of historical documents connected with the father of American Methodism. Visit the link under the Asbury picture, better yet, get a ticket and head to Dallas, you will be glad you did!

Below is the opening introduction to the SMU Exhibition:

“Dust, fever, and too much company, these are my trials: peace, and perfect love, these are my consolations.”  Francis Asbury, April 13, 1815

Francis Asbury, the “Father of American Methodism,” was born in Staffordshire, England in 1745. At the age of twenty-one, Asbury became an itinerant lay preacher in the Methodist movement. Five years later, in 1771, he accepted John Wesley’s call for volunteers to cross the Atlantic and minister in British North America.

Highly regarded for his piety, perseverance, and administrative leadership, Asbury was ordained a Deacon, an Elder, and a General Superintendent (Bishop) during the 1784 founding “Christmas Conference” of the Methodist Episcopal Church.  During his forty-five year ministry in North America, Asbury rode an estimated one hundred thirty thousand miles, preaching more than ten thousand sermons and ordaining an estimated seven hundred clergy. Under Bishop Asbury’s leadership, Methodism in North America grew from less than one thousand members in 1771 to over two hundred thousand in 1816.

This exhibition honors the memory of Bishop Francis Asbury by presenting fifteen documents and publications that detail Asbury’s ministry.

Documents of the Exhibit

Several letters of Francis Asbury are included in the exhibition as well as a letter from John Wesley to Francis Asbury just prior to his ordination as the American Superintendent by Dr. Thomas Coke.

In addition to the letters, the Carhart Bible used by Francis Asbury is also included. The Carhart Bible was acquired by SMU in 1915. It was the Bible of the Methodist minister, John Wesley Carhart. The New York preacher, doctor, and inventor who eventually moved from New York to Texas. 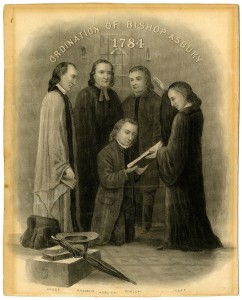 Engraving
1784 Ordination of Francis Asbury Featured at the SMU Exhibition

In addition to the above items and more, there is a 1787 Address by Francis Asbury and Dr. Thomas Coke to the Friends and the Annual Subscribers for the support of Cokesbury College.