The following article on Heptonstall Church is provided by Dr. John Hargreaves. It is a transcript of his recent presentation at the Heptonstall church, Yorkshire UK oldest surviving Methodist Church: 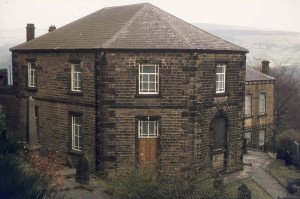 Yorkshire’s oldest surviving Methodist chapel had its origins in the preaching of William Darney a lively itinerant evangelist converted in the Scottish awakening of 1741-42. Of sturdy build and reputedly ‘terrible to behold’ he earned his living as a clogger and pedlar. From 1742 he was active on both sides of the Lancashire and Yorkshire Pennines, founding a number of societies which were brought under Methodist discipline in 1747, when Darney was recognized as a Methodist preacher on the recommendation of Revd William Grimshaw, the evangelical Vicar of Haworth, who has been described by the Methodist historian Dr Frank Baker as ‘the commander-in-chief of revival in the north’.

Charles Wesley first visited Heptonstall in 1747, followed shortly afterwards by his brother John who subsequently made in total some twenty visits to this hilltop industrial village near Halifax between 1747 and 1786. He preached initially in the open air, then in the shell of the building and on one later occasion in the now ruined Anglican church which Wesley in a distinctly un-ecumenical observation described as the ‘ugliest church’ in which he had ever preached. Both Charles and John Wesley sought to remain within the Church of England but by the time of John’s death Methodism had effectively separated after John ordained preachers for service in America in September 1784. Relationships today are much more cordial since the signing of the Anglican Methodist Covenant. 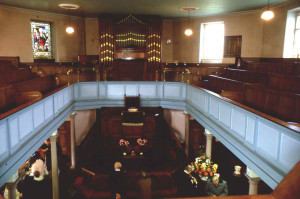 The elegant Georgian chapel built by the first Methodists in Heptonstall near to the cottage on Northgate where they had held their first fellowship meetings was one of the earliest and remains one of few distinctive surviving octagonal chapels favoured by Wesley. He preferred a classical design, distinctive from Anglican ecclesiastical architecture, which gave the congregation on the ground floor and in the galleries maximum visibility and audibility of the preacher during a period when powerful preaching of the word was regarded as the central feature of every service. The octagon design was popularly believed to allow ‘the Devil’ nowhere to hide from rigorously evangelical preaching. The Wesley’s preaching emphasized the need for conversion and that salvation was available for all.

Growth in membership required the chapel to be extended in 1802. By 1818 there were no fewer than 1,002 children enrolled in the Sunday School. Membership , which reached 446 in 1821, had fallen by 1939 to 50; but the church, now in the Calderdale Circuit remains one of the oldest surviving Methodist chapels in continuous use with a devoted if now relatively small membership. Many of the early members were handloom weavers and as textile machinery became mechanised with water and steam-powered technology upland weaving settlements became increasingly de-populated and Methodism established chapels in the valley bottoms at Hebden Bridge, Mytholmroyd and Todmorden to serve an expanding factory workforce.