What is a Triptych?

What is the Francis Asbury Triptych? Maybe the better question is, what is a triptych?

Soon after several years of my wife’s recommendation to convert into a novel my Writer’s Digest award-winning two-hour screenplay about Francis Asbury, it became apparent that the story I had envisioned would take much more than one book to accomplish. Once I outlined Francis Asbury’s early years in England and the first thirteen years of his ministry in America, it was more than clear that one book was not enough. The story I wished to write would require three books and not one.

Three books, that is a trilogy. What is a trilogy? And, why does the word trilogy sound so negative, so almost science-fiction, horror-thriller like?

This is a Triptych

Dictionary.Com defines the word trilogy as a series or group of three plays, novels, operas, etc., that, although individually complete, are closely related in theme, sequence, or the like. Okay, that definition fits, but still, the term sounds so negative. I wanted another word, one more uplifting, maybe even more artistic and somehow tied into the setting of my story. Is that asking too much? I thought not.

Several weeks after these unfortunate feelings toward the word, trilogy, I attended my Saturday evening meeting of the writers group in which I participated. One of our more talented writers, let’s call him Earl, submitted three poems which much like a trilogy shared a common theme and seemed to work in sequence. At the top of these three poems, Earl had written the word Triptych.

Triptych, Earl, what is a triptych? That was my immediate question.

Earl, in his funny and encouraging manner, informed me that a triptych is an artform, a three-panel art form. Trust me, he never once thought that I had any clue to what the word meant. Sadly, he was correct.

Once again, I went to Dictionary.com to find out the definition of the word triptych. The website defines triptych as Fine Arts. a set of three panels or compartments side by side, bearing pictures, carvings, or the like.

Fine arts, this I liked. A set of three, “I think we’re getting somewhere here.”

I now had a new word for my trilogy. A triptych. Yes, The Asbury Triptych. This I could work with.

To be honest, I liked how the word sounded. To me, it sounded more uplifting than the word trilogy. I also liked the fact that it was a play on words, especially when you considered that the three panels were three books and the fact that the opening book, Black Country, was richly adorned with descriptions of the beautiful cathedrals of England. If you didn’t know it, much of the cathedrals which were originally built by the Roman Catholic Church were in the time of Francis Asbury taken over by the Anglican Church.  Why the significance of the cathedrals? Well, most of them were built with a common element behind the altars, a triptych resided behind the altars. Most of these triptych altars were made of marble, some were carved out of granite, some were made of wood, and some of the triptych panels were painted.

Okay, so I was heading in the right direction. The word triptych tied together the concept of a three book series, the ancient church history of the English cathedrals and their ancient art form of a triptych.

Here is a sample of a religious triptych. 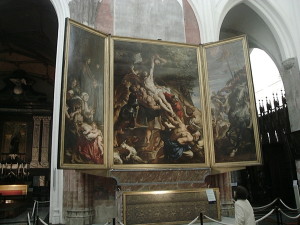